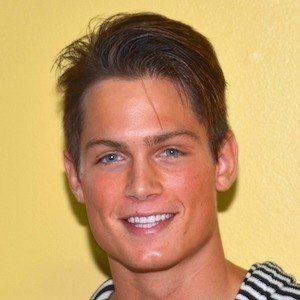 Model and actor most well known for his role as Hunter Morgan in the FOX series Star. He had a recurring role in the series Inhumans and has been a guest-star in Jane the Virgin, Grey's Anatomy and Surviving Jack, among others. In 2019, he began starring as Will in NBC's The InBetween.

After moving to New York City during his senior year of high school, he began working as a model and landed campaigns for Calvin Klein and Versace. He would earn representation from Premium Models Paris, LA Model Management and d'management group in Milan.

He held several state swimming and wrestling records, captained his lacrosse team and was the quarterback for his middle and high school football teams. He later won a state doubles championship and two state team championships in tennis.

His mother Melissa was a former Miss Ohio and first runner-up to Miss America as well as singer while his father Tod was an accomplished illusionist. He grew up with siblings Chase and Chloe.

He portrayed the ex-boyfriend of Jude Demorest's character Star Davis in Star.

Chad James Buchanan Is A Member Of