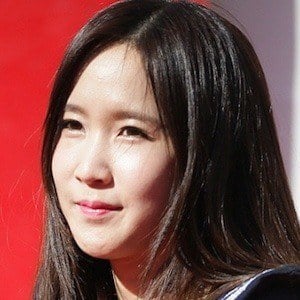 The main vocalist of the K-pop girl band Crayon Pop. She and her twin sister Way also make up the Crayon Pop subgroup Strawberry Milk. An actor as well, she made her television debut in the drama High School: Love On.

Even as a child she loved dancing and singing and eventually dropped out of high school to study musical theatre. However, her career didn't truly begin until she began modeling in 2011.

With a strong background in musical theatre, she has starred in productions of Princess Deokhye and Dreaming of One Summer Night.

Her sister Way is her identical twin and bandmate in Crayon Pop.

She is joined in Crayon Pop by fellow vocalist Soyul.

Choa Is A Member Of