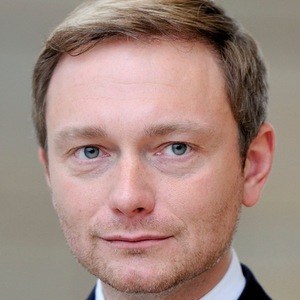 German politician who is known for being the leader of the Liberal Free Democratic Party of Germany. He is also known for being a member of the Bundestag and served in the Luftwaffe branch of the German military.

He attended the University of Bonn where he earned his Masters Degree in Political Science. He first joined the FDP in 1995. He then served as a member of the German Bundstag and became the Leader of the Free Democratic Party in December of 2013.

He is a member of the Board of Trustees for a range of organizations including the Aktive Burgerschaft, the Friedrich Naumann Foundation, and the NRW Foundation.

He married journalist Dagmar Rosenfeld in 2011.

He served as a mediator along with Dutch Prime Minister Mark Rutte in selecting the Alliance of Liberals and Democrats Europe candidates for the presidency of the European Commission.

Christian Lindner Is A Member Of