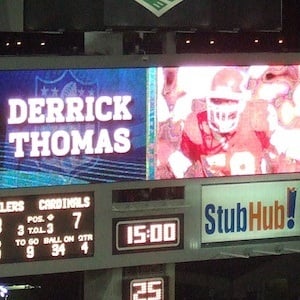 Former NFL player widely considered to be one of the greatest defensive linemen of his era. He posted 126.5 career sacks and was inducted into the Pro Football Hall of Fame in 2009. He spent his entire 11-year career with the Kansas City Chiefs.

He received the Butkus Award during his time with the University of Alabama Crimson Tide.

He set an an NFL record by recording 7 sacks in a single game against the Seattle Seahawks.

His father was a Captain in the United States Air Force.

Derrick Thomas Is A Member Of