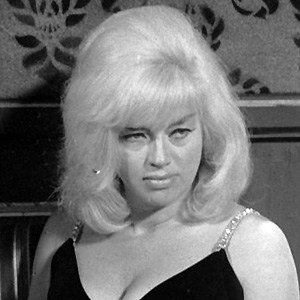 This blonde entertainer became England's main sex symbol from the the '50s to the '60s. She gained fame for her leading roles in the 1956 film Blonde Sinner and the 1955 film A Kid for Two Farthings.

She was able to attend the London Academy of Music and Dramatic Art at age 14 after lying about her age.

She played Mrs. Bolt in the television series Just William from 1977 to 1978.

She was married three times. She married her third husband, Alan Lake, in 1968. She had three children named Mark Dawson, Gary Dawson, and Jason Lake.

Many television fans during the '50s considered her to be the English Marilyn Monroe.

Diana Dors Is A Member Of