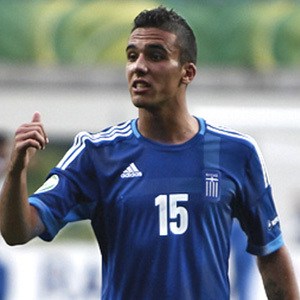 Defenseman who has gained acclaim as a tough player in Greece's Super League, including for Panathinaikos beginning in 2016. He rose to fame playing defensive midfield for Asteras Tripoli F.C. between 2011-2016, and helped the club to a runner-up finish at the 2013 Greek Cup.

He played youth soccer for Asteras Tripolis' youth academy in 2007-2011.

He earned caps playing for Greece's national team during 2018 FIFA World Cup qualifying. He finished in third place during the 2015 Super League with Asteras Tripoli F.C.

He was born and raised in Korakovouni within Greece's Arcadia province.

He and Kostas Fortounis have played as midfield teammates for Greece's national team.

Dimitris Kourbelis Is A Member Of