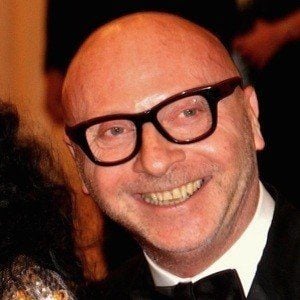 Legendary fashion designer most well known as the Dolce in Dolce & Gabbana alongside Stefano Gabbana. The pair founded their internationally renowned brand in 1985 and have since become a household name.

He briefly studied at Istituto Marangoni before dropping out to focus on work in the industry. He met Gabbana in 1980 through designer Giorgio Correggiari and three years later the pair left their jobs to begin designing independently.

Dolce & Gabbana has won numerous awards including the 1991 Woolmark Prize and the 1993 Best Fragrance of the Year.

His father, Saverio, was a tailor, and his mother, Sara, sold fabric and apparel. He and Stefano Gabbana were a couple for many years before they broke off their personal relationship in the mid 2000s. They continued to work together on the brand.

Dolce & Gabbana have designed for countless A-list celebrities from Madonna to Angeline Jolie.

Domenico Dolce Is A Member Of