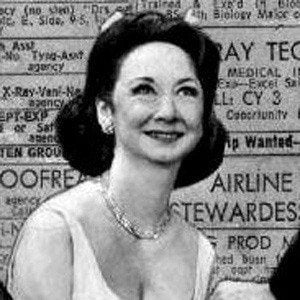 Former journalist and What's My Line? game show panelist. Her newspaper column, The Voice of Broadway, was spread through nearly 150 newspapers across the globe.

She pursued her formal studies at The College of New Rochelle, but eventually dropped out after just one year to accept a reporting job at the New York Evening Journal.

She was once incredibly close with Frank Sinatra, but developed a deep-seeded hatred for him as her career progressed. In fact, she wrote a cover story about him in 1956 called The Frank Sinatra Story, in which she completely debased and maligned him.

She was married to Richard Kollmar until her death in 1965. The couple had three children together: Jill, Dickie, and Kerry.

She wrote several newspaper articles about the assassination of US President John F. Kennedy.

Dorothy Kilgallen Is A Member Of