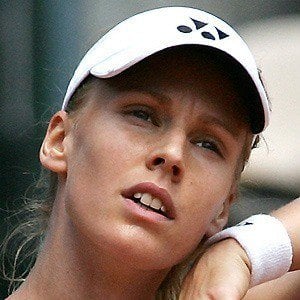 Won gold in singles competition at the 2008 Olympics and also won the 2002 WTA Tour Championships doubles title; reached the final match in the 2004 French Open and 2004 US Open and made it to the semi-finals of Wimbledon twice, but never captured a grand slam title.

She was rejected from the Dynamo Sports Club and the Central Red Army Tennis Club when she was 7 years old.

She won silver in singles competition at the 2000 Olympics.

Her father Viatcheslav was an electrical engineer, and her mother Vera was a teacher.

She lost to Serena Williams in the 2009 Wimbledon semifinals.

Elena Dementieva Is A Member Of