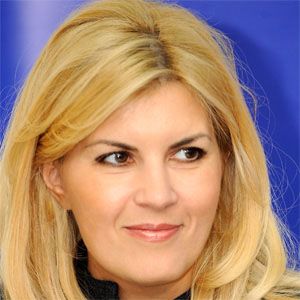 Leader of the Romanian People's Movement Party and member, beginning in 2008, of the Romanian Parliament's Chamber of Deputies. Under the administration of Prime Minister Emil Boc, she also served as Romanian Minister of Tourism.

After graduating in 1996 from the Dimitrie Cantemir Christian University, she earned a graduate degree in military science from the Carol I National Defence University.

She briefly served as Romanian Minister of Environment and Climate Change.

Elena Udrea Is A Member Of