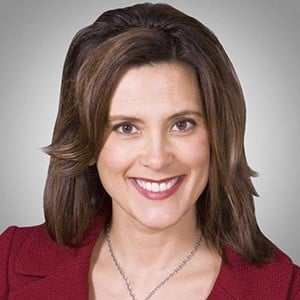 American politician and prosecutor who is best recognized for having been the governor of Michigan. She is a democrat who also serves as a Michigan State Representative and State Senator.

She attended Michigan State University where she earned her BA in Communications and later her JD from Detroit College of Law. She was first elected to the Michigan House of Representatives in 2000 and later the State Senate in March of 2016.

In August of 2018, she became the first democrat to win all 83 counties in the state of Michigan during the primary elections.

She married Marc Mallory in 2011 and has two children and three stepchildren. Her parents were lawyers as well.

She succeeded Rick Snyder as Governor of Michigan in January of 2019.

Gretchen Whitmer Is A Member Of