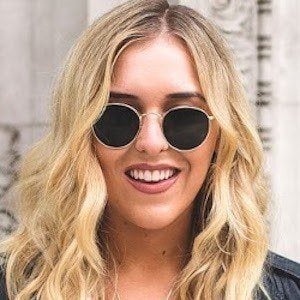 Also known as EmTalks or enshelx, she is a fashion, beauty, and travel blogger and YouTuber. She won Cosmopolitan's Blog Awards Newcomer in 2012 and has held interviews and vlogged backstage at fashion shows. She has reported from the Olympics and the BAFTAS.

She started her blog in March 2012. It was originally called adayinthelifeofems and she only started it to get a spot in one of her university's courses. She soon realized that she liked it and decided to make it about things she was interested in, mainly fashion and beauty.

Part of her signature look is her very tan skin and her bleach-blond hair. She swears by Xen-tan because she swears it doesn't turn you orange.

She has lived in a small town in the Yorkshire area that is placed somewhere between York, Leeds, and Harrogate. She goes into London multiple times per week.

She is a huge Ella Eyre fan and dedicated a blogpost to her in 2015.

Em Sheldon Is A Member Of