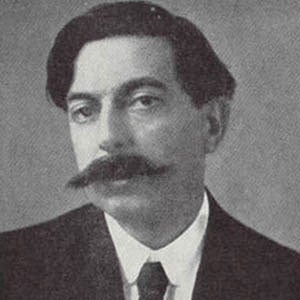 Classical musician whose compositions possessed a decidedly Spanish bent. He was an example of musical nationalism.

He was denied entry into the Paris Conservatoire, but Charles-Wilfrid de Bériot, a conservatoire professor, opted to give him private lessons anyway because of de Bériot's mother's Spanish ancestry.

He unveiled his piano suite Goyescas in 1911. It was his most memorable composition.

His father, Calixto, was a Spanish army captain.

He accepted a recital invitation from President Woodrow Wilson that delayed his return to Spain. He ended up booking passage on the Sussex. It was torpedoed by the Germans, and he lost his life in a futile attempt to save his wife.

Enrique Granados Is A Member Of