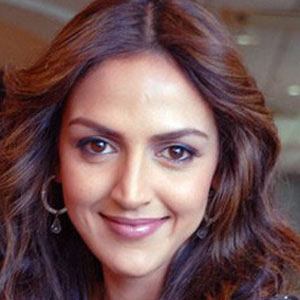 Known for her Filmfare Award-winning performance as Eisha Singh in the 2002 Bollywood movie Koi Mere Dil Se Poochhe, she also appeared in the popular Tamil film Aayutha Ezhuthu, as well as in the 2004 action movie Dhoom.

As a young woman, she studied Bharatanatyam dance and also attended the fashion design program at Mumbai's Mithibai College.

She earned critical acclaim for her role in a 2007 thriller titled Darling.

She grew up in Mumbai, India, as the daughter of Bollywood stars Dharmendra and Hema Malini. She has a sister named Ahana. She married Bharat Takhtani in 2012.

Esha Deol Is A Member Of