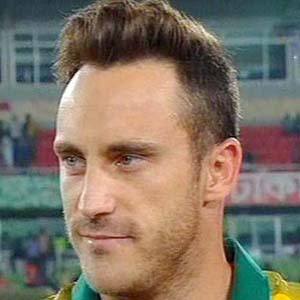 Batsman and bowler who has played domestically for teams like the Chennai Super Kings. He represented his native South Africa in the 2011 Cricket World Cup and was named as one of five Players Of The Year the same season.

He graduated from the University of Pretoria and made his domestic debut with Northerns in 2004.

He is one of the few batsman to average over 50 in Test play for his career.

His cousin is the rugby player Marcel du Plessis.

He and Lonwabo Tsotsobe both played for South Africa in the 2011 Cricket World Cup.

Faf Du Plessis Is A Member Of