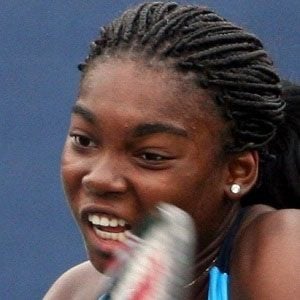 Canadian tennis player who has been ranked in the top five of the world junior rankings. She has earned victories in doubles at the 2013 Tevlin Women's Challenger and in singles at the 2014 ITF $25K in Port St. Lucie.

She was born in Montreal, Quebec and started playing tennis at age 7. She began training at Montreal's Tennis Canada's National Training Centre in 2009.

She has been ranked in the top ten of the WTA rankings in both singles and doubles.

She is three years younger than her sister Elisabeth, who has also played tennis professionally.

She was eliminated by childhood idol Venus Williams at the 2014 Coupe Banque Nationale.

Francoise Abanda Is A Member Of