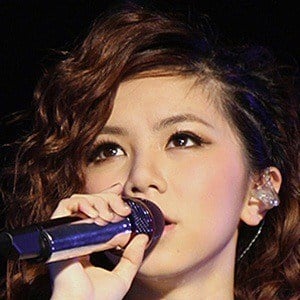 Gloria Tang Tsz-kei, or as she is known on stage, G.E.M., is a Chinese singer-songwriter who made her debut in 2008 with a popular self-titled EP. She began to gain widespread popularity in 2014 after appearing on the television series I Am a Singer in its second season. She has released over 5 albums since her debut in 2009.

At only seven years old she was writing songs and participating in school singing competitions. By 2006, she'd won first place at the Spice it Up competition and caught the attention of soon-to-be manager Tan Chang.

In 2009, she made her film debut as the lead in the film Trick or Cheat. She then made her Hollywood debut in the 2017 animated film Charming.

Born in Shanghai, she moved to Hong Kong at the age of four. Growing up in a musical family, her mother graduated from the Shanghai Conservatory of Music, her uncle was a violinist, her grandfather was a saxophone player, and her grandmother taught her to sing.

She is one of numerous singers who contributed their voices to the movie Charming, including Ashley Tisdale, Demi Lovato, and Avril Lavigne.