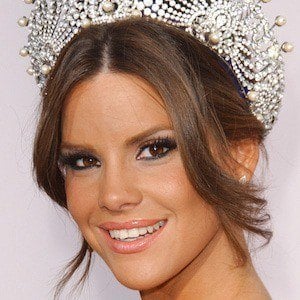 Pageant winner and actress who first rose to fame competing on Univision's Nuestra Belleza Latina, winning the title in the show's third season in 2009. She has since become a face for brands like Maybelline, AT&T, and JCPenney.

Even as a child she was interested in the arts and took singing, dancing, and theatre lessons. However, her studies were postponed for a year when, at fourteen, she was diagnosed with Nephrotic Syndrome.

In 2010, she made her acting debut in the Univision telenovela Eva Luna.

She was raised by her mother, Kenya Nimo, and her grandmother, Blanca Rosa Piñero. Her father, Esnel Gil, immigrated to the United States. She has two sisters, Jackeline Gil and Yendry Mendez.

She starred opposite Guy Ecker in the 2013 telenovela Rosario.

Greidys Gil Is A Member Of