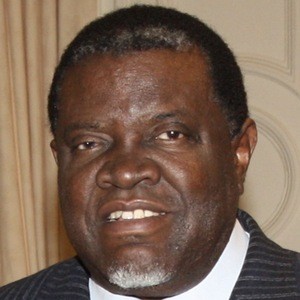 Scholar, teacher and politician who became President of Namibia for the third time in March 2015. He was the first Prime Minister of Namibia from 1990 to 2002. He has also been the Chairperson of the Southern African Development Community.

He studied at Temple University in PA, on a full scholarship. He went on to receive his bachelor's degree from Fordham University in 1970, and his master's degree in International Relations from the Graduate Faculty of the New School in 1974. He completed his P.H.D. from the University of Leeds.

In 1998, he led the assembly responsible for forming the Namibian Constitution, which was unanimously adopted under his chairmanship in 1990.

He married entrepreneur and lawyer Monica Geingos in 2015. He was married to Priscilla Charlene Cash from 1967 to 1992, and together they had one daughter, Nangula Geingos-Dukes. From 1993 to 2008 he was married to Loini Kandume, and has two children with her, Dângos and Hage Jr.

He tweeted in September 2018 that he was discussing Sino-African solidarity and equity at the FOCAC Roundtable Meeting with President Xi Jinping.

Hage Geingob Is A Member Of