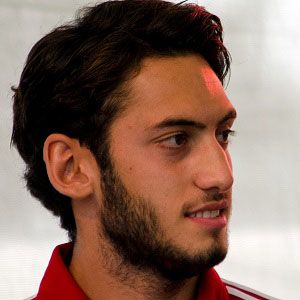 Turkish attacking midfielder who began representing Turkey internationally in 2010 and made his senior debut in 2013. He is also known for his play with clubs like Karlsruher SC, Hamburger SV and Bayer 04 Leverkusen.

He was born in Mannheim, Germany and played in the youth systems of several teams, including Polizei SC Mannheim and SV Waldhof Mannheim.

He won the 3. Liga Player of the Year award in 2013 while playing for Karlsruher SC.

His father is Huseyin Calhanoglu.

He has been teammates with Son Heung-min on Bayer 04 Leverkusen.

Hakan Calhanoglu Is A Member Of