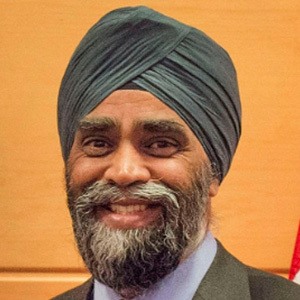 Canadian Liberal politician who was sworn in as Minister of National Defence in 2015.

He joined the The British Columbia Regiment in 1989 as a trooper. He rose to the rank of lieutenant-colonel.

He has won multiple awards, including the Order of Military Merit, the Meritorious Service Medal and the Queen Elizabeth II Diamond Jubilee Medal.

His father is Kundan Sajjan. He has an older sister. He married Kuljit Sajjan in 1996. They have a son, Arjun, and a daughter, Jeevut.

He was sworn in by Justin Trudeau.

Harjit Sajjan Is A Member Of