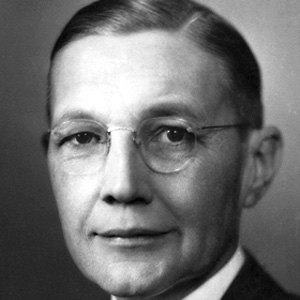 American physiologist who won the 1944 Nobel Prize in Physiology or Medicine for his pioneering research into nerve conduction of signals. He became a Foreign Member of the Royal Society in 1946.

During WW I he was part of the research effort into chemical warfare, and later went to Johns Hopkins Medical School, where he began his most-known research.

His scientific breakthroughs, conducted under the guidance of his mentor Joseph Erlanger, helped future generations of doctors figure out the mechanisms behind pain and reflexes.

He was born in Platteville, Wisconsin, the son of Herman Gasser end Jane Elisabeth Griswold.

Willem Einthoven was another winner of the Nobel Prize for Medicine - he receive his honor for inventing the electrocardiogram.

Herbert Spencer Gasser Is A Member Of