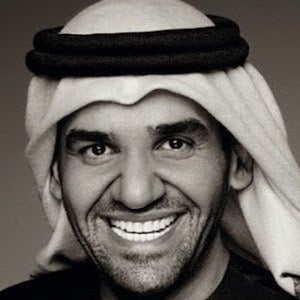 Arabic-language singer who is known for his prolific career in the Khaliji genre. He gained widespread popularity for his 2014 Egyptian song "Boushret Kher." He has also run his own YouTube channel, where he frequently posts his new singles and music videos.

In 1997, he won the Arabic singing competition Layali Dubai, which garnered him widespread renown. He began his career in music by composing various singles for other artists.

In 2008, he was honored with the Murex d'Or award for Best Arabic Male Singer. He has gone on to amass more than 6 million subscribers to his prolific YouTube channel.

He was born and raised in the United Arab Emirates.

He and fellow Arab musician Hani Shaker were both honored by the King of Morocco on World Youth Day in August 2015.

Hussain Al Jassmi Is A Member Of