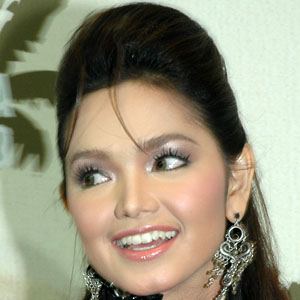 Malaysian singer, songwriter, producer, and winner of the 2002 "Voice of Asia" competition.

She was one of eight children born to a police officer and a singer. She was the granddaughter of a renowned violinist.

In the year 2000, her music sales represented ten percent of the total album sales in the nation of Malaysia.

She and her husband Datuk Seri Khalid were voted by E! News Asia in 2010 as the third most powerful Asian celebrity couple.

She performed for Queen Elizabeth II, among other dignitaries, at the 1998 Commonwealth Games.

Siti Nurhaliza Is A Member Of