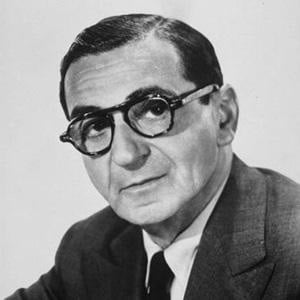 Known for God Bless America and White Christmas. He was considered to be one of America's greatest songwriters.

His house was burned down in an act of antisemitism. His first international hit was Alexander's Ragtime Band from 1911, which started a worldwide dance craze.

He married Dorothy Goetz, whose brother was songwriter E. Ray Goetz, in February 1912. She died of typhoid fever six months after their wedding. He later married heiress Ellin MacKay on January 4, 1926, with whom he fathered four children.

He worked with Ronald Reagan in the film This is the Army from 1942 in which Kate Smith sang God Bless America, his popular 1918 patriotic number.

Irving Berlin Is A Member Of