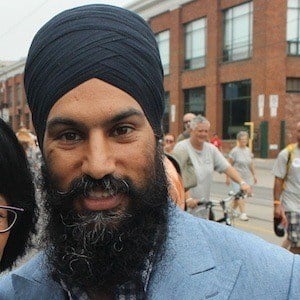 Canadian politician and attorney who is recognized for having been the head of Canada's New Democratic Party. He also served in the Legislative Assembly of Ontario from 2011 to 2017.

While working as an attorney he offered free legal rights seminars across Ontario.

In 2017, GQ Magazine stated that he was an "incredibly well-dressed rising star in Canadian politics."

He has two siblings, Manjot Singh and Gurratan Singh Dhaliwal. In 2018, he married Gurkiran Kaur Sidhu.

He was photographed with American politician Bernie Sanders in 2017.

Jagmeet Singh Is A Member Of