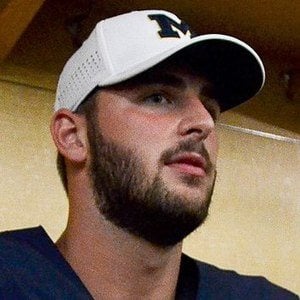 Tight end who was the 5th round pick for the Denver Broncos in the 2017 NFL Draft. He was named to the All-Big Ten offensive first-team in both 2015 and 2016.

He had a standout football career at Pickerington North High School. He began his collegiate career at the University of Michigan in 2013.

As a college junior, he won the Ozzie Newsome Award and was named Kwalick-Clark Tight End of the Year in both 2015 and 2016.

He was born in Pickerington, Ohio to parents Meg Lally and Rob Butt. He majored in sociology at the University of Michigan.

He won the John Mackey Award in 2016, which is given to the top tight end in college football.

Jake Butt Is A Member Of