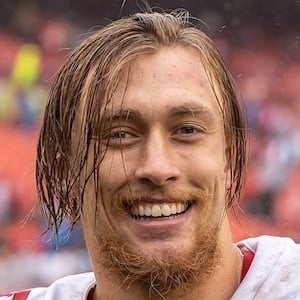 Tight end who was selected in the fifth round of the 2017 NFL Draft by the San Francisco 49ers. He made his first career Pro Bowl in 2018 and he helped the 49ers reach Super Bowl LIV in 2020.

He played NCAA Division I football for the Big Ten's University of Iowa Hawkeyes between 2013-2016.

He set the then-NFL record for most receiving yards in a season by a tight end in 2018. He was named to the NFL's All-Pro second team following his breakout 2018 season.

He married his longtime girlfriend Claire on April 9th, 2019. His father Bruce captained the University of Iowa's 1982 team that played in the Rose Bowl.

He joined former Iowa teammate and quarterback C.J. Beathard on the San Francisco 49ers when both were drafted by the club in 2017.

George Kittle Is A Member Of