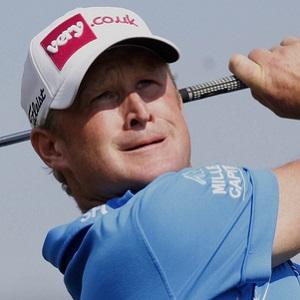 A member of the PGA tour after finishing 2nd at the WGC Cadillac Championship, he secured his first breakthrough win in 2012 at the Irish Open and began his 2013 campaign by winning the Abu Dhabi Golf Championship.

He turned professional in 2000 after a great amateur career for Wales and GB&I. In 2001, he won the Russian Open and the Telia Grand Prix in Sweden on the Challenge Tour before making progress again on the European Tour in the mid 2000’s following a career threatening back injury.

By December of 2013, his official world golf ranking had improved to #28. He won the 2014 Czech Open and became a member of the European Ryder Cup team that year.

He resides in Florida and England with his wife Kat and their children Max and Isla.

He finished just behind Masters champion Bubba Watson at the 2014 WGC Cadillac Championship.

Jamie Donaldson Is A Member Of