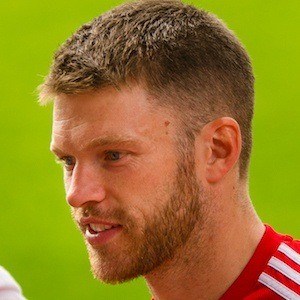 English striker best known for his time as a member of Exeter City, Nottingham Forest and the Queens Park Rangers, winning the Football League Championship title with the Rangers in 2011. He debuted for Scotland in 2010 and scored his first international goal against Faroe Islands in November of that year.

He was born in Dorking, England and played youth soccer with Leatherhead before making his senior debut with Wimbledon in 2003.

In March 2015, he scored the final goal in a match against Bradford City to lead Reading to its first FA Cup semifinal in 88 years.

He married a woman named Sarah and welcomed his first child in 2015. He is eligible to play for Scotland through his grandfather, who was born in Kilmarnock.

He has played with English goalkeeper Robert Green on the Rangers.

Jamie Mackie Is A Member Of