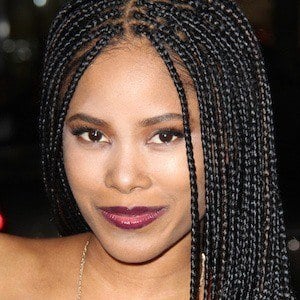 Actress known for appearances in films like The Secret Life of Bees and Van Wilder: Freshman Year, she is most well-known for portraying Birdy Mae in the 2009 season of The Vampire Diaries.

She earned a degree in communication and media studies from Kennesaw University before she returned to her childhood passion acting.

In addition to acting, she is a writer and producer, creating her own production company called Burke Productions. Her debut film Lucky Lotto won The 2010 Women in Film and Television International Short Film Showcase.

She has a sister named Rosana.

She appeared as a dancer and singer alongside Aubrey O'Day in Making the Band 3 in 2005 and 2006.

Jasmine Burke Is A Member Of