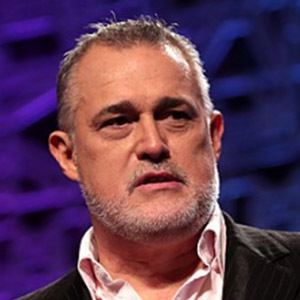 Business executive, author, speaker, and television host who is known for his work on the program C-Suite with Jeffrey Hayzlett. He was the Chief Marketing Officer of Eastman Kodak from 2006 until 2010 and is also known for having published the books The Mirror Test, Running the Gauntlet, and Think Big Act Bigger.

He studied government and international affairs at Augustana College. He then started working for Kodak in April of 2006 as Vice President of the Graphic Communications Group. He then went on to become CEO of the Hayzlett group in 2008.

He is also known for hosting his own podcast on the C-Suite Radio network called All Business with Jeffrey Hayzlett.

He was born and raised in Charleston, West Virginia and married his wife Tami and together they have two children.

He appeared as a celebrity guest judge on three seasons of the show The Apprentice where he starred alongside Donald Trump.

Jeffrey Hayzlett Is A Member Of