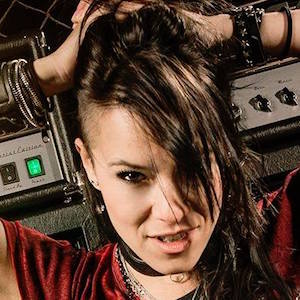 German musician best known for her role as guitarist and bass player for acts like Black Thunder Ladies, Equilibrium, and Knorkator. In November 2015, it was announced that she'd left Equilibrium. She then became a replacement guitarist for the rock band Evanescence.

She began studying music at the age of six. By 2000, she began playing guitar professionally.

She is the owner of a music school in Brilon, Germany.

Native to Stuttgart, Germany, she has toured around the world with her bands.

She toured alongside Evanescence singer Amy Lee at the bands shows in 2015.

Jen Majura Is A Member Of