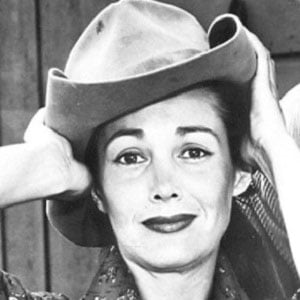 Perhaps most notable for her recurring role as Milly Scott in the early 1960s television series The Rifleman, she is also remembered for her guest spots on series such as The Texan and Gunsmoke, as well as for her performances in Apache Woman; Fort Yuma; War Drums; and several other Western movies of the 1950s.

She began her acting career by appearing in stage productions at Southern California's famous Pasadena Playhouse. Then, in 1949, she made her big screen debut in Fighting Man of the Plains.

A screenwriter as well as an actress, she co-wrote (with Katherine Reback) the 1997 film Fools Rush In.

The daughter of Austrian-born Vaudevillian Amelia Berky and Italian-born movie theater manager Joseph Emma, she spent her youth in Geneva, Illinois. From 1953 until 1974, she was married to Hawaii Five-O creator Leonard Freeman (with whom she raised three daughters); after Freeman's death, she was briefly married to director Walter Grauman.

Early in her career, she appeared with Bob Hope and Mickey Rooney in the 1953 feature film Off Limits.

Joan Taylor Is A Member Of