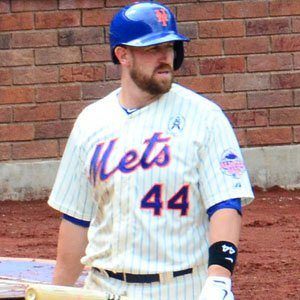 Outstanding defensive catcher in the minor leagues who joined the majors in 2004, playing for the Kansas City Royals.

He was one of the top catchers in the minor leagues, and rated at one point among the top 25 best prospects in baseball.

He spent 2010 with the Toronto Blue Jays, where he hit three home runs in a single game and was chosen to be the starting catcher at the 2010 All-Star Game.

His wife gave birth to twins, Cooper and Brody, in May 2008.

Though drafted by the Houston Astros, he was traded for Carlos Beltran before he took his first major league at-bat.

John Buck Is A Member Of