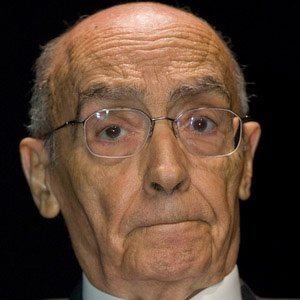 Portuguese author and poet who received the Nobel Prize for Literature in 1998. His best-known works include The Gospel According to Jesus Christ (1991) and Blindness (1995).

He attended technical school and briefly worked as a car mechanic before becoming an assistant editor for the Portuguese newspaper, Diario de Noticias.

After publishing his first novel, Land of Sin (1947), he wasn't able to publish his next book until 30 years later. His writing style often features long sentences, at times more than a page long and with no pauses for dialogue.

He was born to a peasant family in Azinhaga, Portugal. He and his wife, Pilar del Rio, had a daughter.

His novel Blindness was adapted into a 2008 film starring Julianne Moore, Mark Ruffalo and Alice Braga.

José Saramago Is A Member Of