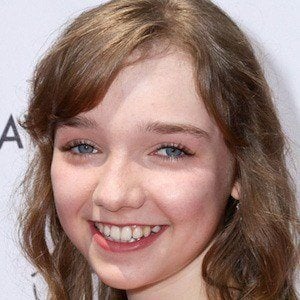 Won a Young Artist Award for her role in The Year Dolly Parton Was My Mom and also earned praise for her roles in Vampire Dog and Surfacing.

She started taking professional acting classes when she was 10 years old, with her first part being in a Vancouver Arts Institute student film.

She was a guest star on the shows Emily Owens M.D, R.L. Stine's The Haunting Hour and Falling Skies. She also starred as the character Lyric on the third season of The Killing.

She is a native of Vancouver, Canada and is an only child. Her mother Sue Chappel has a PhD in science.

She starred alongside Kenneth Welsh in Surfacing, a film also known by the title Wet Bum.

Julia Sarah Stone Is A Member Of