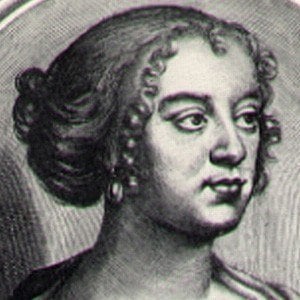 Seventeenth-century English-Welsh author who was most famous during her lifetime for her poetic works. She was also a translator of the work of Pierre Corneille.

She was a member of The Society of Friendship. Often, she held meetings of the organization's Welsh chapter at her home.

Her poems -- for example, "To my Excellent Lucasia, on our Friendship" -- contain, according to some literary critics, subtle lesbian undertones.

She married a wealthy family friend; however, her poem "To my dearest Antenor" suggests that she was not truly in love with him.

Her work was often compared to the more radical literature of fellow female author Aphra Behn.

Katherine Philips Is A Member Of