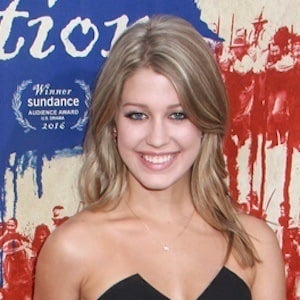 Actress who is famous for her guest starring roles on TV. She has appeared on the series One Tree Hill, Army Wives, The Vampire Diaries, and Sleepy Hollow.

She made her on-screen debut in 2011 on One Tree Hill.

She starred in the 2016 historical drama film Birth of a Nation as Catherine Turner. As a singer-songwriter, she released her first official single in February 2015, called "Put Me Back On My Throne."

She was originally born and raised in Orlando, Florida.

She starred alongside Nate Parker in the 2016 film Birth of a Nation.

Katie Garfield Is A Member Of