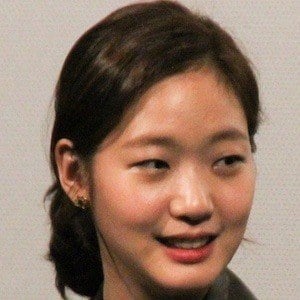 South Korean actress who made a conspicuous film debut in 2012 with A Muse, which earned her a variety of accolades including a Blue Dragon Film Award, Grand Bell Award and Korean Association of Film Critics Award. She has since appeared in successful films like 2015's Coin Locker Girl and starred on the tvN series Cheese in the Trap.

She enrolled in the School of Drama at Korea National University of Arts after being inspired to act by seeing Chen Kaige's Together.

She sang the Tearliner song "Attraction" for the official soundtrack for Cheese in the Trap.

She and her family moved to China when she was 4 years old and lived there for the next 10 years.

She co-starred with Lee Min-ki in the 2014 thriller Monster.

Kim Go-eun Is A Member Of