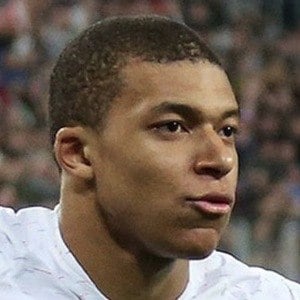 French soccer player who joined Paris Saint-Germain on loan from Monaco in 2017. He helped lead the French national team to a World Cup Championship in 2018. He's won three Ligue 1 titles with PSG.

In his youth, he began playing soccer for AS Bondy, where his father was a coach.

His permanent transfer to PSG in 2018 cost $210 million dollars, the most expensive transfer for a teenage soccer player in history. He became France's younger player to score a goal in a World Cup game. He's finished as Ligue 1's top scorer in two seasons and he was awarded Player of the Year in 2019.

His full name is Kylian Mbappé Lottin. His father Wilifried was his soccer agent as well as a coach. He has a younger brother named Ethan Mbappé. Soccer player Jires Kembo Ekoko is his adopted brother.

He became teammates with Neymar on PSG.

Kylian Mbappé Is A Member Of