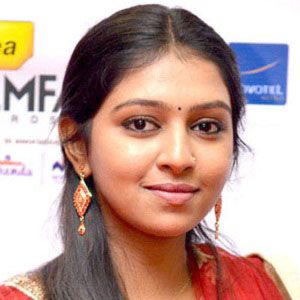 Actress and singer who rose to fame for her Filmfare Award-winning portrayal of Archana in the 2012 Tamil feature Sundarapandian. She earned a second Filmfare nomination for her work in Kumki and went on to star in the 2015 Tamil action movie Komban.

Her first film, the Malayalam drama Raghuvinte Swantham Raziya, was released one day after her fifteenth birthday.

She performed the song "Kukkuru Kukkuru" on the soundtrack of the 2014 Tamil movie Oru Oorla Rendu Raja.

She grew up in Thrippunithura, Kerala, India, as a member of a Malayali family. Her mother, Usha Menon, taught dance, and her father, Ramakrishnan, had a career as a visual artist.

She was cast alongside Rajkiran and Vimal in the 2014 comedy movie Manjapai.

Lakshmi Menon Is A Member Of