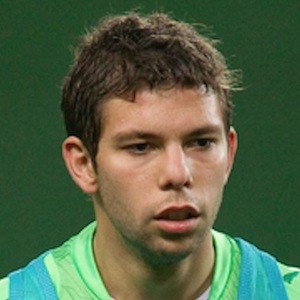 Professional football player known for his work with the Racing club de Avellaneda as a left back. He is also known for having played with the Sporting CP, the Milan FC, and the Godoy Cruz FC as a defender.

He is known for having won several honors with the Sporting club including the Taca de Portugal in 2007 and the Supertaca Candido de Oluveira during the 2008 season.

He was born and raised in San Lorenzo, Argentina.

Gabriel Mercado is a fellow Argentine professional player also known for his work as a defender for the Racing Club.

Leandro Grimi Is A Member Of