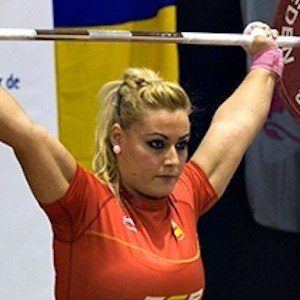 Spanish weight lifter who is best known for mainly competing in the Women's 75 kg category. She has competed in several world championships and is nationally recognized for her performances, appearances, and athletic ability.

With a passion for sports at a young age, she began to focus on the training more so than the sport itself. This led to a development in weightlifting. Soon after her passion took over, she began competing professionally with her first international competition in 2007.

She has won multiple awards and received national critical attention for her participation in the sport. She is best known for winning the gold medal in the 2012 London Olympic Games in the category of under 75 kg.

She was born and raised in Ponferrada, Spain.

As an Olympic level weight lifter, she can be seen in relation to other women who compete at the same level including Jenny Arthur and Mattie Rogers.

Lidia Valentin Is A Member Of