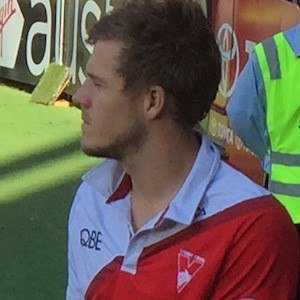 Australian rules football player known for his emergence with the Sydney Swans. He was made a starter for the first time in 2013 and delivered 22 goals while averaging 21 disposals and five marks per game. He scored 78 goals in his first 101 matches.

He was a second round pick (40th overall) in the 2010 National Draft. He was originally selected by the Dandenong Stingrays, but made his AFL debut in 2011 with Sydney.

He has a sister named Aley.

As a rookie, he drew comparisons to now-retired AFL player Jude Bolton, who was his teammate on the Swans.

Luke Parker Is A Member Of