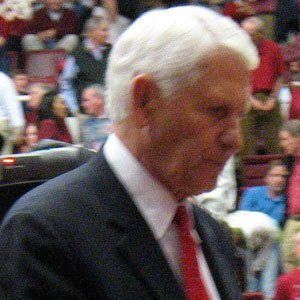 Longtime NCAA basketball coach who led the University of Arizona Wildcats from 1983 to 2008, helping the team win the 1997 NCAA Championship. A member of the Basketball Hall of Fame, he retired with a career record of 781-280.

He played college basketball at Augsburg College from 1953 to 1956, then received his first coaching john at Mahnomen High School.

He was married to Roberta "Bobbi" Russell from 1953 until her death in 2001. In honor of the Olsons, the University of Arizona basketball court is named the Lute and Bobbi Olson Court. He and Bobbi had five children together. In 2003, he married Christine Jack Toretti.

Future NBA stars Jason Terry and Mike Bibby helped Olson deliver an NCAA Championship to the University of Arizona in 1997.

Lute Olson Is A Member Of