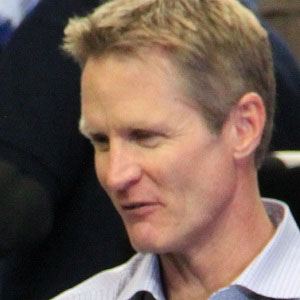 Became the head coach of the Golden State Warriors in 2014 and led the team to NBA Championships in 2015, 2017, 2018 and 2022. During his NBA career, he was known for his three-point shooting, winning three NBA Championships alongside Michael Jordan on the Chicago Bulls and another two with the San Antonio Spurs.

He grew up in the Middle East, attending Cairo American University in Egypt before transferring to Pacific Palisades High School. He starred at the University of Arizona from 1983 to 1988 and his #25 jersey was later retired by the school.

With the Bulls, he hit the series clinching shot against the Utah Jazz in Game 6 of the 1997 NBA Finals, the most historic moment in his playing career.

He married Margot Kerr in 1990 and he has three children: Madeleine, Matthew and Nicholas. He is the son of Malcolm Kerr, a Middle East political expert.

After his retirement, he became an NBA analyst and color commentator for NBA games. He then replaced his friend Mark Jackson as coach of the Warriors and Jackson took Kerr's commentating job.

Steve Kerr Is A Member Of