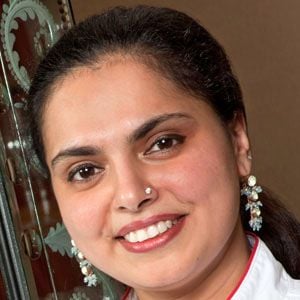 Perhaps known best as a judge on the Food Network's Chopped, Chauhan is also famous for holding executive chef positions at the Chicago restaurant Vermilion and its New York branch, At Vermillion. In 2014, she opened a Nashville restaurant called the Chauhan Ale and Masala House.

After earning a degree from India's WelcomGroup Graduate School of Hotel Administration, she trained at the Culinary Institute of America. She went on to hold culinary apprenticeships with the Taj, Sheraton, and Oberoi companies in her native India.

She penned a cookbook titled Flavors of My World: A Culinary Tour Through 25 Countries.

A native of Ranchi, India, she settled in the United States in her early adulthood years. She married restauranteur Vivek Deora in 2007; they have two children together.

She and fellow chef Amanda Freitag both judged Chopped and made appearances on The Next Iron Chef.

Maneet Chauhan Is A Member Of