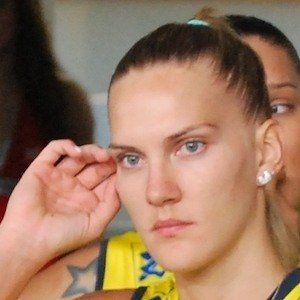 Volleyball player from Brazil who is best known for playing the position of wing spiker and opposite spiker for the Molico/Osasco team. She is also known for competing in the 2008 Summer Olympics in Beijing, China.

She first began playing volleyball at the age of 14. She began playing for a career in 1996 when she was a part of the Rolandia/Facar team. She earned more recognition for her skill when she joined the BCN/Osasco team in 2000. In 2004, she began playing with the Brazilian national team.

She has won several gold medals for her volleyball performances including at the 2008 Beijing Olympic Games, the 2009 FIVB Volleyball World Grand Prix in Japan, and the Pan-American Cup in Miami in 2009.

She was born in Sao Paulo, Brazil and is of Russian and German descent.

She plays alongside Tandara Caixeta as a member of Brazils national volleyball team.

Marianne Steinbrecher Is A Member Of