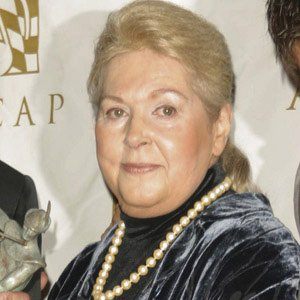 In 1983, she became the first songwriter to have written three of the five songs nominated for an Academy Award for Best Song. She frequently collaborated with her husband on their music. She wrote two musicals.

She studied psychology and English at New York University.

She was inducted into the Songwriters Hall of Fame in 1980. She was given the Women in Film Crystal Award in 1986.

She married her longtime songwriting partner Alan Bergman in 1958. He co-wrote the three Oscar-nominated numbers from 1983: How Do You Keep the Music Playing? from Best Friends, It Might Be You from Tootsie with Dave Grusin, and If We Were in Love from Yes, Giorgio with John Williams.

Her lyrics for Someone in the Dark from E.T. the Extra-Terrestrial were sung by Michael Jackson.

Marilyn Bergman Is A Member Of